Donald Trump’s Israeli-Palestinian peace plan, which envisions Israel incorporating hundreds of Jewish settlements alongside and within an independent Palestinian state in exchange for some other border territories. However, Netanyahu’s rushed push for annexation so far has deepened the chasm in Israel's relations with its neighbors. Gulf Arab officials and observers accuse Mr. Netanyahu of jeopardizing a careful and unprecedented thawing of ties that Gulf leaders pursued with Israel at the expense of their own domestic politics.

The Real chance of promoting an Arab-Israeli Peace Plan
by Gerardo E. Martínez-Solanas

The Palestinian Authority, from the time of Arafat to the present day, has lost the opportunity to establish an independent State due to the intransigent way it has refused to include the recognition of the State of Israel in a Peace Treaty and to accept –while it was still possible to do so– the West Bank borders established after the 1967 six-days war.

In fact, since the time of the partition sanctioned by the United Nations, the Palestinians and neighboring Arab states refused to accept the existence of the State of Israel and attacked once and again since the 1948 war through several other subsequent wars with the intention to erase the Jewish state from the map. However, the Israelis won every one of those wars, sometimes fighting on three fronts.

These wars of aggression against the Jewish state have provoked in the population of Israel a feeling of extreme urgency that prompts them to establish secure borders that guarantee their safety and survival. Even during times of truce between wars, Israel has been subjected to constant harassment at its borders and repeated missile bombardments of its populations from Gaza, Lebanon and Syria. This violence has only served to exacerbate Jewish extremism, which is now reflected in its own rulers.

The current Bertelsmann Transformation Index (BTI) shows that Democracy is under threat worldwide. 60 of the 137 states surveyed have undermined their democracy in the last 10 years. 58 states have restricted their rights to demonstrate, freedom of opinion, freedom of the press, and the right of assembly. The BTI analyzes transformation processes toward democracy and a market economy in an international comparison method and identifies successful strategies for peaceful change in their WEB pages. 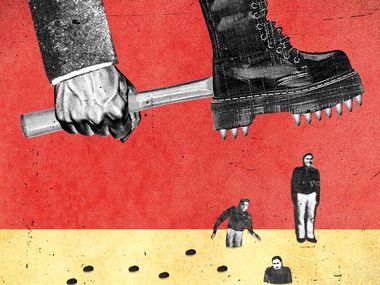 The Corona virus is putting our democracies to the test.

Democracy International (DI), an NGO based and registered in Cologne, Germany, reports that «the Corona pandemic is reinforcing this trend». The crisis that is afflicting the world right now is very disturbing and the organizations and institutions (such as the DI, our PDCI and many others) that promote democracy and defend human rights must coordinate their efforts to counter this revolutionary trend towards anarchy, the precursor of authoritarianism and totalitarianism.

Energy systems have important and often hamful environmental impacts. Historical and current energy systems producing carbon dioxide are dominated by fossil fuels (coal, oil and gas). They produce as well other greenhouse gases affecting climate change and accelerating exponentially global warming. Up to 2018, Solar, Wind, Hydropower, Nuclear and other minor renewable energy sources barely managed to satisfy 4% of global energy consumption, while production using polluting resources grew close to 50% during the first 18 years of this century. The visible reduction in air pollution due to the paralysis caused by the pandemic, demonstrates the need for a radical transformation of energy sources.

The world’s energy system must be transformed completely

It has been changed before, but never as fast or fully as must happen now.

For more than 100,000 years humans derived all their energy from what they hunted, gathered and grazed on or grew for themselves. Their own energy for moving things came from what they ate. Energy for light and heat came from burning the rest. In recent millennia they added energy from the flow of water and, later, air to the repertoire.

Jon Cohen (of Science magazine) asked Fauci,“How are you managing to not get

fired,” which probably isn’t a question that most people typically get. Fauci answered, “Well, that’s pretty interesting because to [Trump’s] credit, even though we disagree on some things, he listens. He goes his own way. He has his own style. But on substantive issues, he does listen to what I say.”

... a White House statement by mid April indicated that “Dr. Fauci has been and remains a trusted advisor to President Trump.” Trump himself said “I like him. He is terrific,” about Fauci. Although, Trump did add, “Not everybody's happy with Anthony” and “Not everybody‘s happy with — everybody.”

May 10.– Fauci doesn't exactly ooze controversy. As the longtime Director of the National Institute of Allergy and Infectious Diseases (NIAID) since 1984, he’s been able to work through multiple different Presidential administrations and iterations of Congress that have crossed both major political parties. This has included beginning that position under President Ronald Reagan and being awarded the Presidential Medal of Freedom in 2008 by President George W. Bush. Fauci was one of the principal architects of the President’s Emergency Plan for AIDS Relief (PEPFAR). Over the years, he hasn’t had any real outrageous public moments. He’s never lip synced on stage, interrupted someone’s MTV Award acceptance speech, been accused of deflating any footballs, or made fun of any particular groups of people.

The Economist looks at the dangerous gap between America’s stockmarket and the economy. In the past few weeks a gut-wrenching sell-off in shares has been followed by a delirious rally. Between February 19th and March 23rd, the S&P 500 index lost a third of its value. With barely a pause it has since rocketed, recovering more than half its loss. At one level, this makes good sense. Asset managers have to put money to work as best they can. But there is something wrong with how far stock prices have moved. American shares are now higher than they were in August, suggesting that the economy can get back to business as usual. There are countless threats to such a prospect, starting with how far the rosy view on Wall Street is from life on Main Street, where people are out of work, small businesses are struggling to get cash and there is the ever-present threat of a second wave of the coronavirus pandemic.

The Markets vs the real Economy

May 7.– Stockmarket history is packed with drama: the 1929 crash; Black Monday in 1987, when share prices lost 20% in a day; the dotcom mania in 1999. With such precedents, nothing should come as a surprise, but the past eight weeks have been remarkable, nonetheless. A gut-wrenching sell-off in shares has been followed by a delirious rally in America. Between February 19th and March 23rd, the s&p 500 index lost a third of its value. With barely a pause it has since rocketed, recovering more than half its loss. The catalyst was news that the Federal Reserve would buy corporate bonds, helping big firms finance their debts. Investors shifted from panic to optimism without missing a beat.

This rosy view from Wall Street should make you uneasy (see article). It contrasts with markets elsewhere.